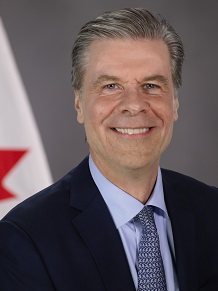 John Ossowski was appointed President of the Canada Border Services Agency on December 7, 2016.

Prior to this appointment, John was Deputy Commissioner of the Canada Revenue Agency from July 2015 to December 2016.  He has also held senior positions as Associate Deputy Minister of Public Safety Canada and also as Assistant Secretary, International Affairs, Security and Justice Sector, at the Treasury Board Secretariat (TBS).  He has also worked at Communications Security Establishment Canada (CSEC) where he was Director General, Policy and Communications and then Deputy Chief, Corporate Services. Before joining CSEC, John was Assistant Director, Government Relationships and Communications at the Financial Transactions and Reports Analysis Centre of Canada, which is Canada's financial intelligence unit. Prior to this, John spent a number of years at TBS in the Government Operations Sector and finally as the Executive Assistant to the Secretary.

John has a bachelor's degree in Economics from the University of Victoria.