This Quarterly Financial Report (QFR) has been prepared as required by section 65.1 of the Financial Administration Act and in the form and manner prescribed by the Treasury Board. This quarterly report should be read in conjunction with the Main Estimates, Canada’s Economic Action Plan 2018 (Budget 2018) and Canada’s Economic Action Plan 2019 (Budget 2019).

Information on the reason d’être, mandate, role and core responsibilities of the Canada Border Services Agency (CBSA) can be found in Part III Departmental Plan and Part II of the Main Estimates.

The QFR has not been subjected to an external audit or review.

This quarterly report has been prepared by management using an expenditure basis of accounting. The accompanying Statement of Authorities (Table 1) includes the Department's spending authorities granted by Parliament, and those used by the Department consistent with the Main Estimates (as applicable) for the 2018-19 and 2019-20 fiscal years. This quarterly report has been prepared using a special purpose financial reporting framework designed to meet financial information needs with respect to the use of spending authorities.

The authority of Parliament is required before money can be spent by the Government. Approvals are given in the form of annually approved limits through appropriation acts, or through legislation in the form of statutory spending authority for specific purposes.

When Parliament is dissolved for the purposes of a general election, section 30 of the Financial Administration Act authorizes the Governor General, under certain conditions, to issue a special warrant authorizing the Government to withdraw funds from the Consolidated Revenue Fund. A special warrant is deemed to be an appropriation for the fiscal year in which it is issued.

The Department uses the full accrual method of accounting to prepare and present its annual departmental financial statements that are part of the departmental results reporting process. However, the spending authorities voted by Parliament remain on an expenditure basis.

This section highlights the significant items that contributed to the net increase or decrease in resources available for the year and actual expenditures as of the quarter ended June 30, 2019. 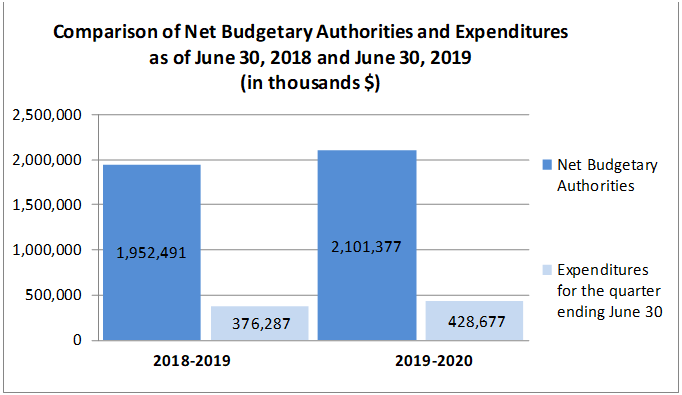 The Agency’s Vote 1 Operating increase by $186.2 million or 11.9%, which is attributed to the net effect of the following significant items (excluding the statutory authorities):

Increases are mainly attributed to:

Decreases are mainly attributed to:

*Note: Budget 2018 provided 2 year funding for the irregular migration, which comes to an end in 2019-20. In recognition of the continuring activites, Budget 2019 further provided $81.9M in funding for enhancing the integrity of Canada's borders and asylum system.

The Agency’s Vote 5 Capital decreased by $72.3 million or 36.4%, which is attributed to the net effect of the following significant items:

Increases are mainly attributed to:

Decreases are mainly attributed to:

The Agency’s Statutory Authority related to the employee benefit plan (EBP) increased by $35.0 million, or 18.8% from the previous year, which is attributed to: $20.1 million for new funding received in the 2019-20 Main Estimates and $14.9 million net increase in new funding received by the Agency at Q1, including in impacts resulting from the EBP rate changing from 20% to 27% in fiscal year 2019-20.

2.2 Explanations of Significant Variances in Expenditures from Previous Year

As indicated in the Departmental Budgetary Expenditures by Standard Object (Table 2), the increases by standard object are mainly attributed to: 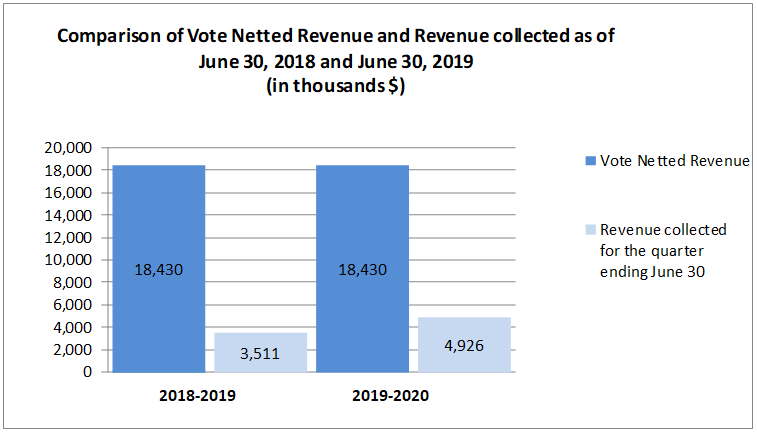 The CBSA’s changing operating environment makes the Agency particularly susceptible to external drivers that are largely beyond its control. Together, these drivers have the potential to affect the organization’s ability to adhere to its annual financial plan.

April 2019 saw important initiatives advance under CBSA Renewal: the new Functional Management Model (FMM) and organizational structure and the Nationalization of Internal Services. The FMM is foundational to CBSA Renewal as the transition will provide better support and accountability to its strategic decision-making processes along its three main business lines: traveller, commercial and trade, and intelligence and enforcement.

The Agency is pursuing several large information technology (IT) and physical infrastructure projects. Most are multi-year in nature and represent substantial investments. Specific to information technology, the Agency continues to support services it is expecting to phase out while waiting for the delivery of government-wide corporate solutions which include secure cloud computing and data storage.

Delays can add additional challenges as project costing does not adequately allow for fluctuating costs for materials commodities and other market rate price changes. Inflation also drives up costs on deferred or delayed projects.

The Agency strives to mitigate financial risks by risk-rating its projects, conducting periodic project reviews, and by holding regular budget discussions. The Agency will continue to examine its resource base in an effort to fully align its operations to the priorities of the Government and Canadians.

4. Significant Changes in Relation to Operations, Personnel and Programs

Effective April 1, with the combining of the Programs and Operations Branches, three new branches were established, each with accountable Vice-Presidents: Denis R. Vinette, Vice-President Travellers Branch, Peter Hill, Vice-President, Commercial and Trade Branch and Jacques Cloutier, Vice-President, Intelligence and Enforcement Branch, none of which are new to the Agency.

Lastly, Patrick Boucher joined the CBSA as the Vice-President and Chief Transformation Officer.

Effective April 1, 2019, the Canada Border Services Agency officially launched its enhanced functional management model. Under this new model, Vice-Presidents of the three business line branches (Travellers, Commercial and Trade and Intelligence and Enforcement) are accountable for program transformation, development, design and delivery, from coast-to-coast and end-to-end with the direct support of all regions. They are the business owners and are accountable for driving major information technology projects within their functional areas, which is an industry best practice and in line with other government departments. The Information, Science and Technology Branch (ISTB) will continue to oversee the technical aspects of these projects. Regional Directors General (RDGs) are now directly accountable to the three Vice-Presidents.

The National Real Property and Accommodations Directorate (NRPAD) completed its national realignment of resources on March 31st 2019. The resulting impact will enable the organization to more effectively and efficiently operationalize key priorities and enhance our capacity to manage the Agency’s custodial, leasehold and legislated portfolios thereby expanding the Directorates ability to support the CBSA renewal initiative. The nationalized model is designed to support a nationally consistent and innovative approach to modernizing the Agency’s border infrastructure by leveraging regional and national project management expertise through integrated investment planning and data-driven reporting strategies. To ensure that the organization is properly positioned to respond to and support the evolving dynamic real property demands of the CBSA, NRPAD is developing a Professional Development Plan (PDP) that will clearly identify the required core competencies and skill sets, strengthen succession planning, generate knowledge transfer and retention, and promote the CBSA as an employer of choice.

In support of the Agency’s sustainable development strategy, the NRPAD re-adjusted its regional base and significantly invested in the Environmental Operations Division to ensure that the Directorate has the necessary capacity to support and advance the agency’s agenda as it embarks on transitioning to a clean economy by reducing its greenhouse gas emissions, and improving its resilience to climate change. In June 2019, the NRPAD Environmental Operations and Material Management team acquired the first Government of Canada zero emissions hydrogen vehicle for use at the Jean-Lessage International Airport in Québec City.

Additionally, following the Budget 2019 funding decision, the Directorate has established the organizational framework required to deliver the Port of Entry replacement projects identified in the Land Border Crossing Project.

The Agency continues to make progress on the re-alignment of its material management portfolio with an expected completion date of spring 2020.

Looking forward, our Agency is committed to the vision of CBSA Renewal, which is designed to maximize the potential of technology and further implement innovation to enable our officers to stand strong and provide effective service amidst rising volumes and ever evolving security threats.

After you finish your visit, could you answer some quick questions about what you came to do?

Choosing “Yes, after my visit” will open a new window that you can go to once you complete your visit.

Yes, after my visitNo, thank you